[FAQ] Why? Defining the Need…

Note: The following post reflects current thinking and we invite your commentary and input as we move forward.

One of the most common themes that has emerged in the variety of conversations we’ve had with students, teachers, administrators, and community members concerning the new school project is: why do we need this project?  Or in edu-speak terms: What’s the problem you are trying to solve and by what metrics are you going to measure the project’s success in solving this problem?  If the answer to that question has seemed somewhat nebulous, it’s likely because there are so many equally applicable and important answers to that question, ranging from a micro-level (the “trees”) to a macro-level (the “forest”) perspective, and with metrics that are more or less immediately and specifically measurable.  In the first of what will be an ongoing series of blogs tackling this key and complex issue, I am going to address perhaps the most macro issue with the longest event horizon for measuring “success” – life after formal education, and more specifically getting, keeping, and being successful in a job or career.

As reported by the US Bureau of Labor Statistics, young workers (aged 20 to 24 years old) have been disproportionately impacted by unemployment rates in the United States.  Young workers aged 20 to 24 years are almost twice as likely to be unemployed as compared to the overall average.  This dramatic increase in unemployment risk is not observed for any other age subgroup. 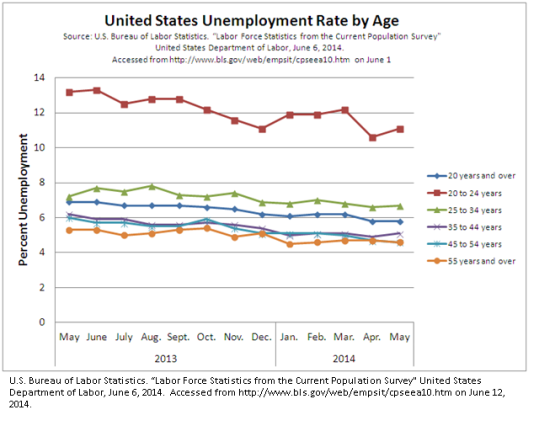 Amongst those fortunate enough to have a job in 2013, workers under age 25 represented only about one fifth of hourly-paid workers, but they represent about half of hourly-employees who were paid the federal minimum wage or less (BLS Reports).  Thus, young workers have also been disproportionately impacted by the wage structure in the United States, and are more likely to earn less money.

These age based differences might logically be attributed to differences in level of formal education, as current data (2012) indicate that 66.3% of current jobs require only a high school diploma (or equivalent) or less education.  Conversely, only 26.4% of jobs require an associate’s degree or higher level of post-secondary education (Monthly Labor Review). 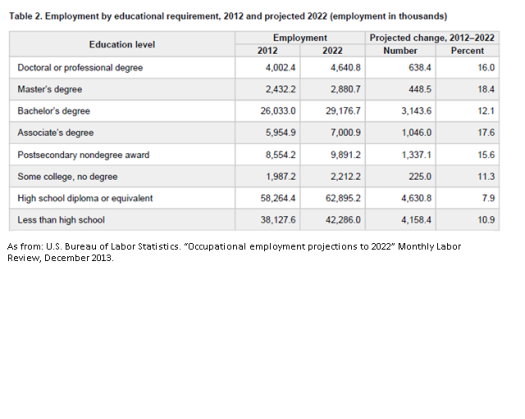 Thus, we might logically hope that the trends observed represent the impact of joblessness and low earnings amongst under-educated young people, and conversely that as long as students graduate from high school and pursue post-secondary education, they will be just fine – get a job and make a good wage.  Accordingly, given that at Greenwich High School approximately 92% of graduates pursue some sort of post-secondary education (GPS Strategic School Profile 2011-2012), we might mistakenly believe that this problematic employment outlook does not apply to the vast majority of our students. 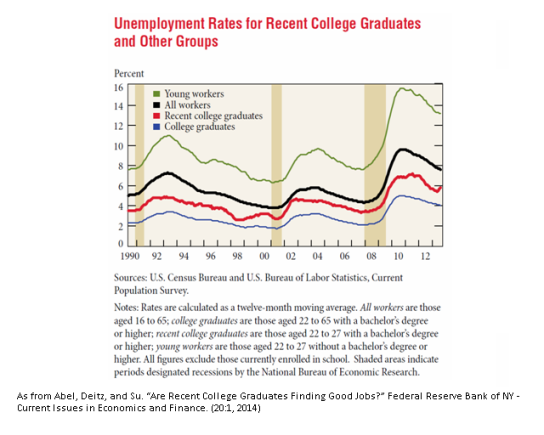 Comparison to equivalent data from 40 years ago further illustrates the magnitude of the problem.  For many different sub-categories of employment, the likelihood of underemployment has more than quintupled (or more!) since 1970 (Center for College Affordability).  Thus, today’s recent college graduates are increasingly working at low-wage jobs and/or working only part-time. 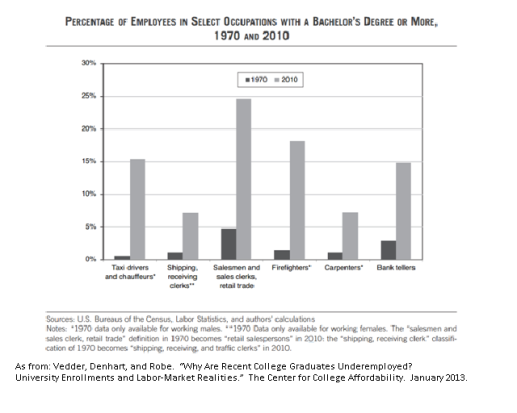 All of this data (and a lot more that I could cram in here but which for the sake of relative brevity I have omitted), clearly highlights the following PROBLEM: Why do young people (aged 20-24), even if they have a college degree, still have a harder time getting and keeping a job that pays well?

The somewhat obvious answer is, “Well, they don’t have enough experience.  Older workers who have more experience are more likely to get the job.  With more experience those younger workers that do get a job will earn more money.”  OK.  Except what we really mean when we say “experience” is “additional skills and abilities that make them better prepared to perform a given job.”  In other words, inherent in that argument is the belief that young people who have completed formal education up to and including college still have not acquired certain skills and abilities that are required in today’s job market.

In response to this troubling data about underemployment and unemployment of recent college graduates, the Business School of Bentley University launched a “Preparedness Study” in which they sought to identify what exactly was “missing” for these recent college graduates attempting to enter the workforce.  As part of their efforts, they conducted a massive nationwide survey in which 3,149 respondents across 9 different stakeholder categories answered a total of 307 survey items across 11 major themes during an interview (average time 29 minutes).  Their goal: to understand how key stakeholders define career preparedness and rate the preparedness of recent college graduates, and to identify solutions to ensure that students graduate from college ready for workplace success.

One consistent finding of the Bentley report – a significant percentage of stakeholders across all categories gave colleges a grade of a “C” or lower when rating how well higher education prepares students for the real world of work. 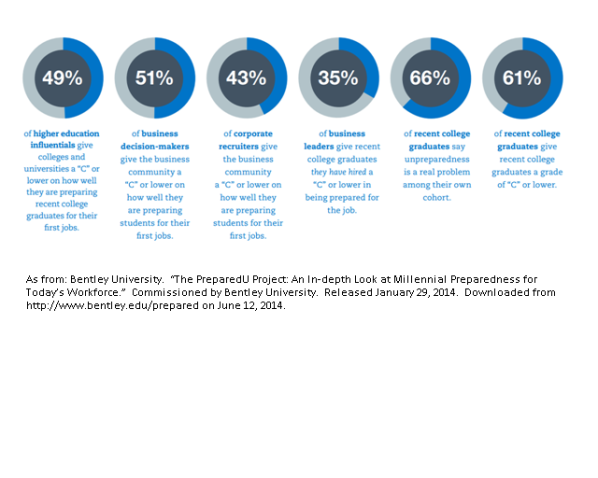 In another study addressing the same issue, the global management consulting firm McKinsey & Co, in partnership with Chegg (an online learning platform company serving high school and undergraduate students), conducted a survey of 4,914 former Chegg customers in October and November of 2012.  Survey respondents included students of four-year and two-year private and public colleges, as well as vocational and for-profit institutions, who had graduated between 2009 and 2012.  In this study, 30% of four-year college graduates and 40% of two-year college graduates indicated that college did NOT prepare them well for employment.  Specific areas in which graduates of both 4-year and 2-year colleges felt underprepared included: technical skills, quantitative reasoning, project management, leadership, oral communication, written communication and teamwork. 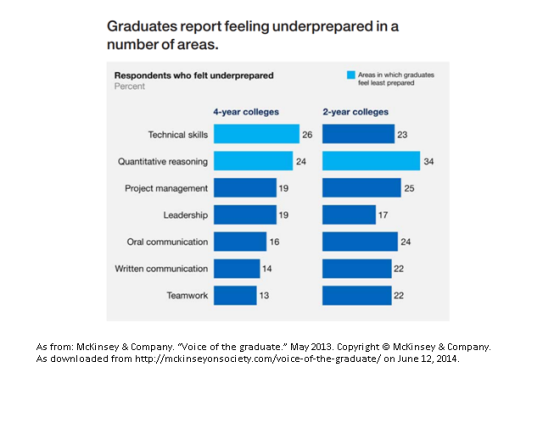 To whom do underemployed college grads assign the blame for this lack of preparedness?  Not to the workforce.  In the Bentley study, 60% of the recent college graduates blamed themselves for their unpreparedness, 42% blamed their colleges or universities, and 31% blamed their professors, while only 13% blamed the businesses from whom they sought employment.

Virtually everyone surveyed in Bentley study agreed that underpreparedness was a HUGE problem, and not just for the students themselves, but for the country as a whole.  Overall, 74% of respondents believed that lack of preparedness among recent college graduates contributes to the economic problems facing the United States today.  Within stakeholder subgroups, 82% of High school students, 81% of college students, 68% of business decision-makers, 73% of corporate recruiters, and 73% of respondents in higher education held this belief.  Notably, 62% of business decision-makers and 66% of corporate recruiters even went so far as to state that newly hired recent college graduates harmed the day-to-day productivity of their business specifically because they were not well prepared.

And the Bentley respondents are not the only ones who are so desperately concerned.  Recent reports from a variety of government agencies, non-profit research centers, institutions of higher education, and other information outlets, including the Federal Reserve, the Center for College Affordability, The Chronicle of Higher Education, Reuters, the Huffington Post, USA Today, The Wall Street Journal, and The New York Times (just to name a few) all express concern about the underemployment and underpreparedness of today’s college graduates.

So what to do to solve the “underpreparedness” dilemma? How do we properly prepare students with the requisite technical skills, quantitative reasoning, project management, leadership, oral communication, written communication, and teamwork abilities needed to thrive in the current American workplace?  Amongst 14 solutions proposed in the Bentley study, the top three proposed solutions, with 90% or more of respondents agreeing that the proposed solution would have a significant impact on the problem, were: 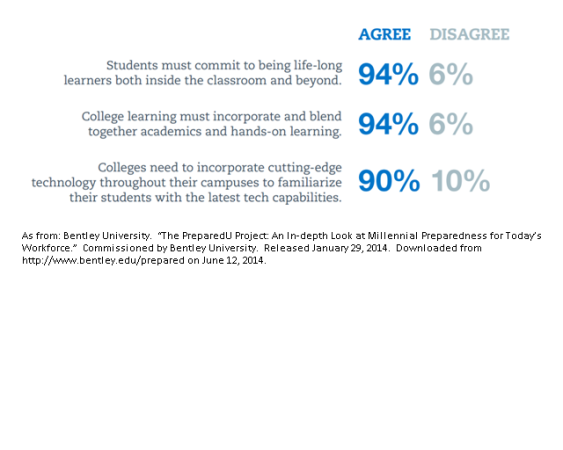 1.  Cultivation of a passion for lifelong learning, as applied both within the classroom and without.

2.  An interdisciplinary blending of academics with authentic problem solving and hands-on learning.

3.  Incorporation of technology across the spectrum of subjects and tasks and in a manner the keeps up with real world applications of this technology.

These three SOLUTIONS TO the underpreparedness PROBLEM are at the heart of the design principles of the NEW SCHOOL INITIATIVE at GHS.

This entry was posted in FAQ, Why Change?. Bookmark the permalink.

3 Responses to [FAQ] Why? Defining the Need…