Yesterday, Tony Andrade, the National History Day Regional Coordinator for Fairfield County, visited Humanities. National History Day is a nationwide competition that asks students to complete original research, create an argument, and then produce either a documentary, performance, museum exhibit, or website. When we first began the project, I challenged students to tell a story and make an argument that the world hasn’t seen before–a lofty goal for even the most seasoned historian. So what did Mr. Andrade hear when he conferenced with students?

Flora, Nicole, Katherine, and Juliana’s group has focused on Women Airforce Service Pilots (WASP) during World War II and specifically the story of Gloria Heath, a 93-year-old veteran who lives in Greenwich. They’ve already outlined the script for their performance and are scheduled to interview Ms. Heath in the coming weeks. In addition, they’re also contacting a woman in the military today to support their argument about the WASPs’ impact on women’s rights. Just as any historian would do, the group has found a unique story to tell that illustrates a larger historical trend.

Dylan, Enzo, and Alex are studying the Manhattan Project. As their research evolved, they focused their project on Dr. Roy Glauber, a Nobel Prize-winning physicist who is the last surviving member of the Manhattan Project. Then, they took their research a step further. Dylan told me he was going to contact Dr. Glauber for an interview. “It’s worth a try,” I told him, wondering how likely it was that such an eminent scientist would respond. A few days later, Dylan received an email from Dr. Glauber’s assistant agreeing to do the interview. I’ve taught the Manhattan Project and the atomic bombing of Hiroshima and Nagasaki many times; however, when I sat in on the interview over Skype last week, I learned things about each of the topics I’d never heard before. For both the students and myself, it was a powerful lesson on the importance of primary sources in revealing new information about even the most heavily debated historical events. 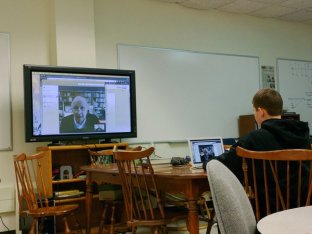 Examples like this abound. Emily is interviewing her grandmother about her experience growing up as a “hidden child” during the Holocaust. Joey is researching Connecticut’s contributions to World War II with a focus on soldiers’ stories. Jane, Sofi, and Rylie are also taking a local approach by highlighting the contributions of Connecticut’s own Thomas Dodd, a prosecutor during the Nuremberg Trials. Fjolla and Grayson have contacted a veteran of D-Day to deepen their understanding of the battle and bring to life the uncertainty that accompanied the invasion, from Eisenhower down to families on the homefront. Each project goes beyond “textbook history” and shows the power of using a local and personal approach to explain history’s most significant events.

After Mr. Andrade left the class, I felt energized. All of the students’ hard work was really paying off. Listening to students talk about their projects made me think of some of the books I’ve recently read about the era: Laura Hillenbrand’s Unbroken, Erik Larson’s In the Garden of the Beasts, and just this past month, the novel All the Light We Cannot See by Anthony Doerr. Each book tells a unique story and shines a light on an aspect of history that previously remained in the shadows. And that’s exactly what students in Innovation Lab are doing and why supporting them in their projects is so exciting.

Last night, at an information session for parents, someone asked about the goals of the teachers involved in Innovation Lab. As I waited for my turn to respond, I thought about class that day, and how exciting it was to hear students discuss their projects, the steady hum of intellectual debate, project planning, and eureka moments still echoing in my mind. Before I got a chance to answer the question, though, the conversation shifted to another topic. Part of me felt relieved, because I knew my words would probably fall short in describing the educational philosophy that led me to become a teacher in Innovation Lab. Much better, I thought, to let the students’ work speak for itself.

This entry was posted in Uncategorized. Bookmark the permalink.