Posted on March 6, 2016 by drsarahgoldin

The past two weeks in STEM have seen the beginning of our next major project, which we are calling “Eureka!  It’s Battery Power!!!”  Linking to our marking period motif of “Inspiration” and those “a-ha” moments that drive innovation and progress, this project asks students to create a device with a sustaining spark.  The parameters for the project are actually quite simple: create a device that uses electrical power in a manner that is SUSTAINABLE, PORTABLE, and MEETS A NEED.

We began by familiarizing ourselves with circuits and electricity.  We built lemon powered circuits, compared the structure and function of series versus parallel circuits, and investigated Ohm’s Law and the Power equation.  We also collected real time data on the charging of a cell phone battery, and then used that data to perform mathematical regressions to uncover the exponential functions that describe how batteries charge. 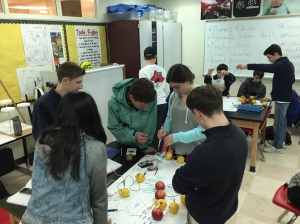 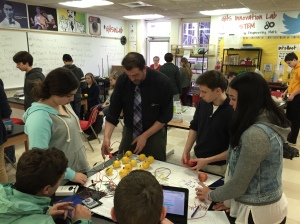 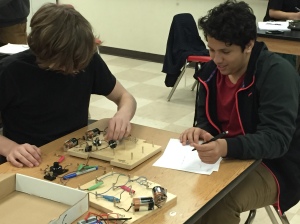 Regressions of the piecewise functions of cell phone charging data.

Once we had the basics down, students took their new learning and ran with it.  Ideas flowed like water as they brainstormed a variety devices to meet a wide array of needs.

Initial brainstorming on the white boards.

By the end of the week, students had narrowed their focus, and settled on initial concepts for their designs.

One group is planning on making a solar powered go cart.  They’ve already started a “Go Fund Me” account and raised 150$ to buy parts.  Step one – find an old chassis for a gas powered go cart that can be re-purposed and re-fitted with an electric motor.  Between Craig’s list and the local dump, progress is being made.

Another group is planning on making a solar powered dehumidifier that produces potable water from atmospheric moisture.  Their initial research has been two-fold.  First, they sought to identify geographic locations that need such a device, by finding data on relative humidity, average family size, and access to drinking water around the globe.  Initial results suggest that their efforts might be most suited to countries of southeast Asia.  Second, they need to figure out the “sweet spot” for power requirements versus water output.  How much water per day can they get from a solar panel of useful size?

Yet another group will be constructing a skateboard with dynamos incorporated into the wheels, in order to provide the electrical power to charge a cell phone, and/or play music through an on-board Bluetooth speaker.

The great ideas just keep coming, and run the gamut from flat out fun to meeting a real societal need.  It’s virtually guaranteed that ideas and plans will shift as vision meets reality, which will be a beautiful process to watch.  Stay tuned to see how it all unfolds…..

This entry was posted in Weekly Wrap-ups. Bookmark the permalink.