(The title is an allusion to one of my favorite poems, “The History Teacher”, by Billy Collins.)

While it may sound like the beginning of some ridiculous existentialist discussion–What is the meaning of life? Why is grass green? Why is green green?–the answer to the question informs everything about how a social studies teacher approaches curriculum and instruction.

Note to the reader: I am deliberately not saying “History teacher.” It’s kind of a sore spot in the social studies community. Yes, we have a community. One with conventions and meetings and books with names like Historical Detective and Sherlock History.

At least that’s what the professor and I concluded at the end of our discussion. Sometimes, however, this can feel like an added burden. Projects have to be subject-specific, but also focused on the bigger picture. Students not only have to understand the historical implications of the decision to drop the atomic bombs on Hiroshima and Nagasaki, but the ethical implications as well. There’s a big difference between asking why the US dropped the atomic bombs on Japan and whether or not it was justified.

Tomorrow, almost fifty Innovation Lab students will present projects at the National History Day Fairfield Regional Competition. This year’s theme is Taking a Stand in History. To be successful, a project must look at individuals as decision-makers, people who challenged the status-quo by standing up, sitting down, spying behind enemy lines, speaking up for the voiceless, or simply surviving in the face of seemingly insurmountable obstacles.

For the project, students brainstormed questions, researched their topic, crafted an argument, and then created a documentary, exhibit, performance, or website. Although this may sound like a “history project,” the content, skills, and concepts learned by students reach far beyond the purview of the discipline.

For one, students learned how to think. Not only as historians, but as citizens, and, dare I say it, human beings. I won’t bore you with the details of Bloom’s Taxonomy, but trust me when I tell you that the project follows his levels of thinking all the way to the top. 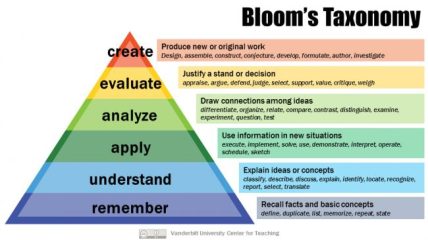 The taxonomy I won’t bore you with.

And I won’t be able to do the projects justice by simply describing them here. I’ll post pictures after the competition on Saturday–as long as I remember to take pictures. Neither social studies teachers nor history teachers are known for their social media prowess.

Similar to many of the questions posed by students in their NHD projects, the answer to the history/social studies debate is a lot more complicated than a simple yes or no.

This entry was posted in Uncategorized. Bookmark the permalink.

1 Response to The Social Studies Teacher